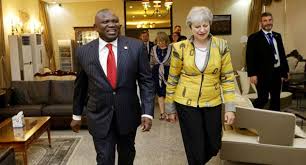 Theresa May, British Prime Minister, has declared the availability of £750 million credit facility for Lagos to boost export financing also other activities in the state.

May announced during a meeting with Governor Akinwunmi Ambode of Lagos state, at the Murtala Muhammed International Airport, Ikeja. Additionally at the meeting was the Lagos State Deputy Governor, Dr. Idiat Adebule including other members of the state executive council.

May who noted the commercial importance of Lagos, further emphasized that the sustainability and growth in Britain’s relationship with Lagos are pertinent for the state and her country.

The Ambode-led administration may want to rethink accessing the available credit facility, as Lagos currently has the highest foreign debt profile.

In as much as this is a welcome improvement for the state, it will significantly increase its external debt profile by $975.92 million.

May visited Nigeria as part of her first-time visit to three African countries since she resumed office. Other countries she was scheduled to attend were South Africa and Kenya.

In what was understood to be why May visited the continent, the Prime Minister during her speech while in South Africa highlighted the high level of poverty in Africa and Nigeria specifically.

May said, “Most of the world’s poorest people are Africans. And growing wealth has brought rising inequality, both between and within nations. For example, much of Nigeria is thriving, with many individuals enjoying the fruits of a resurgent economy. 87 million Nigerians live less than $1.90 a day – making it home to more poor people than any other country in the world.”
Labels: business-news