September 15, 2018
FIFA task force has recommended the use of an algorithm to calculate transfer fees as well as a luxury tax and a limit on the number of players who can loan in a report on possible reforms to the soccer transfer system. 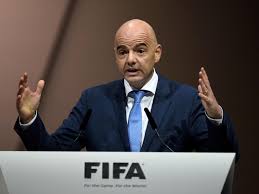 A report, which has been noticed by Reuters, found many failings in the current system, saying among its various criticisms that it led to “various abuses at the expense of young players and the integrity of competitions.”

It said that an increased transfer market was driving “unsavory practices which may head to the exploitation of players.” In a segment on the role of agents, the report continued: “The transfer system appears to have turned into a risky market. “This is not good for the football clubs or grassroots which are the basis of the professional sport.”  Gianni Infantino, FIFA president, said after being elected in 2016 that transfer system reform was one of his priorities and he has since voiced his interest at spiraling transfer fees. The report said that “mechanisms to complete transparency and objectivity” in the calculation of transfer fees should be an honor. It raised different ideas for establishing the brakes on fees, set of mathematical rules, or including the use of an algorithm, or calculate the cost of players. The task force, initiated by Infantino in November, told the Swiss-based CIES Football Observatory had already developed an algorithm to “estimate transfer values and probabilities scientifically.” Another idea put forward was to force a luxury tax on unnecessary transfer spending and use the money raised to create a solidarity fund. The report also suggested limiting the number of player loans a club could make in a season to within six and eight in and the same number out, with a height of three to or from the same club. It also said that the loan system required to have a clearly-defined purpose. The report said the current setup “sometimes limits young players from fully developing their talent,” adding that one unnamed club had loaned out 146 players between 2011 and 2017. A limit on squad sizes also suggested, the report saying that “the stockpiling including subsequent loaning of players, especially young players, can be harmful to their development due to the unsettling nature of being ‘on loan.’”

Concerning agents, it proposed a cap on fees and an end to the method where the same agent can act for both clubs and the player in a single transaction. It suggested the creation of a clearinghouse to process transfers, pay agents and redistribute training compensation, stating this would help prevent “fraudulent conduct and money laundering.” (Reuters/NAN)